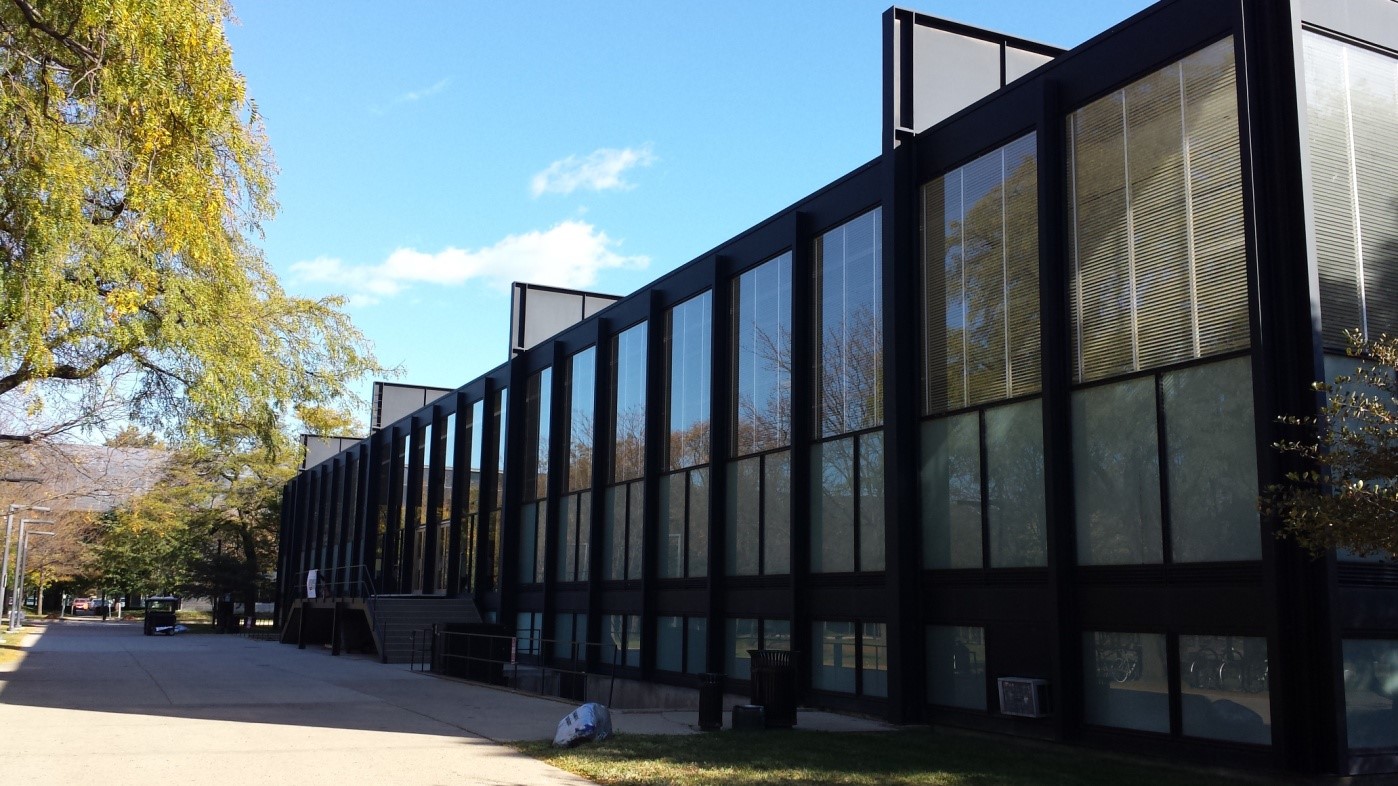 This weekend was the Chicago Architecture Foundation’s 5th annual Open House Chicago, a festival that opens over 200 architecturally significant buildings to the public for free. Open House Chicago is part of the Open House Worldwide network, which hosts similar events in 20 cities across the globe.  At the Illinois Institute of Technology, the Mies van der Rohe society invited the public to tour two of their namesake’s most important works during this exciting celebration of Chicago’s architectural heritage.  Since this particular designer has his own society dedicated to preserving his legacy, we figured instead of our weekly round-up of what we’ve been reading, we’d joined the crowd and explored IIT!

When one considers the design of America’s leading university campuses and buildings, images of stately red brick halls and Neo-Gothic arches that remind Millenial students of Hogwarts come to mind.  The Illinois Institute of Technology in Chicago’s historic Bronzeville neighborhood completely ignores these common assumptions by embracing German transplant Ludwig Mies van der Rohe’s mid-century modern, minimalistic master plan.  IIT is one of only a few American university campuses to be entirely designed by a single architect.  His trademark steel and glass structures create a campus of clean lines and open spaces in which to move and think and innovate. 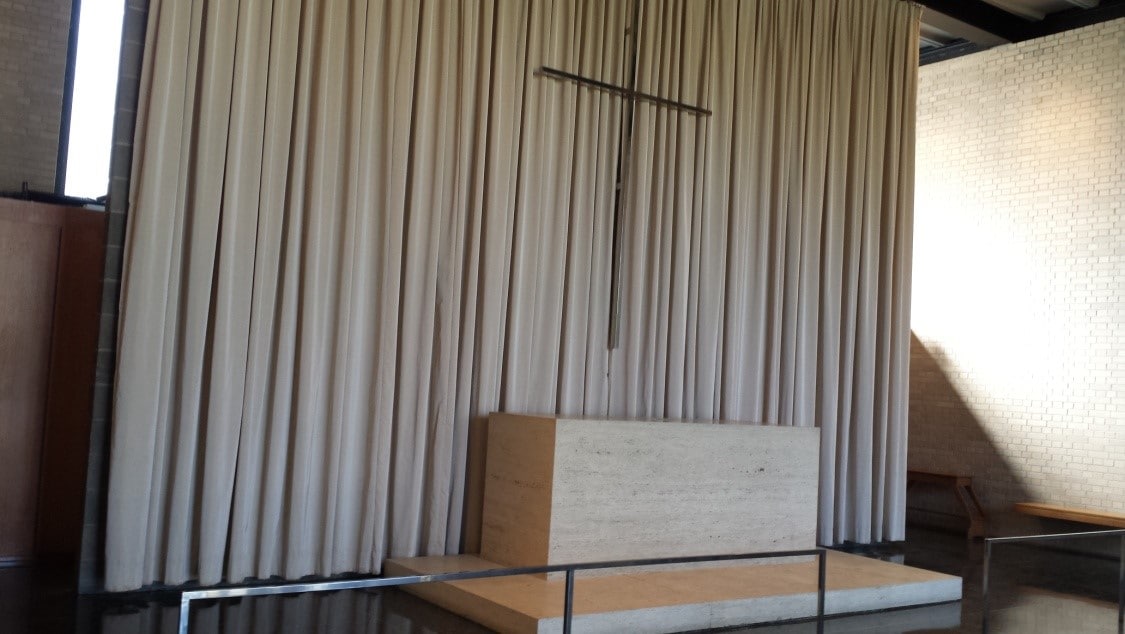 Being a technology driven secular school, the unassuming Carr Memorial Chapel blends perfectly with its adjacent edifices.  Being Mies’ only religious building and his only work outside of Europe to include masonry, the structure refuses to hint at its intended purpose from the exterior.  This is just as well, since one of the defining ideas in Mies’ designs is that buildings should be able to evolve to meet the needs of their patrons.  Widely referred to by students as the “God box”, the non-denominational chapel does just that.  No pews are found, instead black plastic chairs are available that can be stacked and stowed in the back depending on need. A solid travertine altar sits below the thin stainless steel cross in front of a stone colored floor to ceiling curtain, together creating the focal point of the space.   The curtains can be pulled so as to hide both religious pieces in order to utilize the structure for non-christian or secular use.

The north and south walls use an English cross-bond pattern of brick, which create a horizontal stripe pattern that emphasizes the peacefulness the space hopes to produce, despite the thunder of the Green Line trains pouring in through the open back windows every few minutes.  The soaring 19 foot ceiling in an otherwise modest room emphasizes the difference between the inhabited space below and what is out of reach above, whether that be spiritual or philosophical.  This is further expressed by the East entrance of transparent glass divided into three horizontal sections by black steel cross beams: the lower, which contains the doors we walk through, the upper, entirely out of reach, and a narrow third between them, highlighting the separation.  The back of the building is similar to the front, but uses a milky translucent glass, allowing filtered sunbeams to backlight the sanctuary.  Mies himself said of this piece “in its simplicity it is not primitive, but noble, and in its smallness, it is great”. 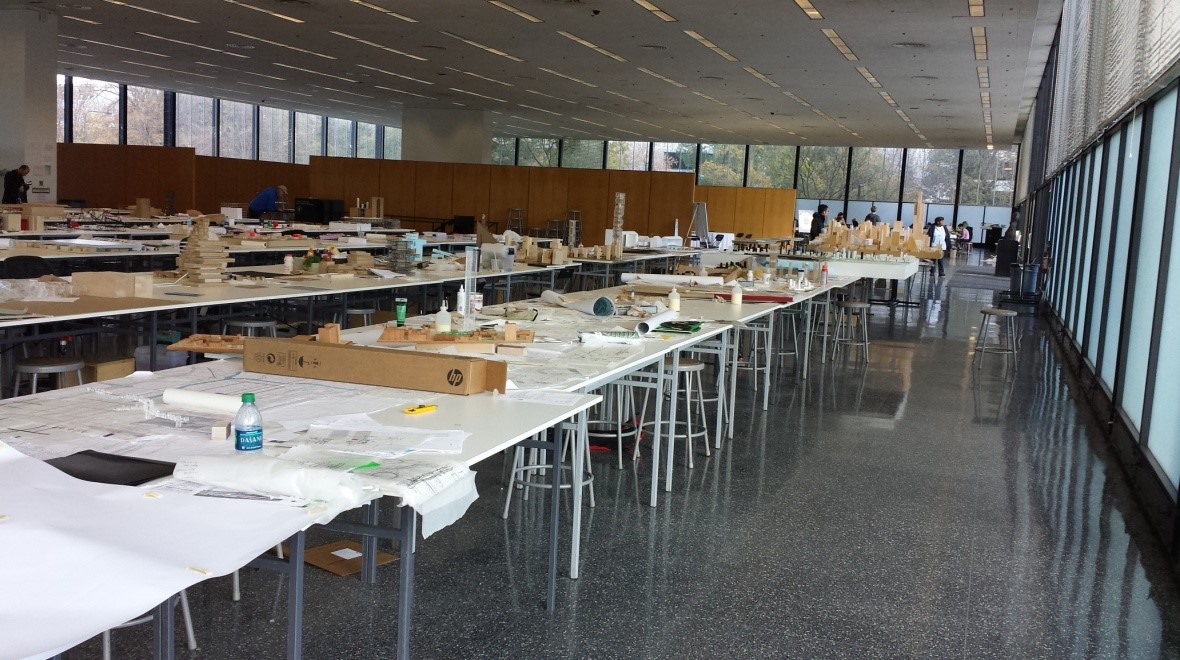 A few blocks away from his simple chapel sits the building that is considered Mies’ masterpiece, the S.R. Crown Hall.  The 18 foot ceilings only have two white support columns while all rooms in the 26,400 sq ft main floor are created by freestanding dividers of wood or fogged glass framed by his trademark black steel.  This design allows the ITT architecture school it houses to utilize the space in a myriad of ways, as best fits the school’s needs on any given day.  Today, long tables hold projects and models while a handful of students are still hard at work on a sunny Saturday afternoon.  As with the Carr Memorial Chapel, Mies divides the vertical space, this time using the milky translucent glass in the bottom section to diminish distractions for the architecture students that use the building, and transparent glass on the upper half of the outer walls to let in more natural light.

Descending the floating staircase, a beautiful and functional design element that hides its supports, one enters the lower level that continues the original open floor plan.  The Architecture School’s library is kept separate by a glass wall from the free flowing lecture areas and art design classrooms.

46 years after his death in his adopted home of Chicago, Mies van der Rohe’s legacy still lives in the buildings he created and the campus he designed, as well as his other works in Chicago.  Considered one of Chicago’s greatest architects, his work helped define modern architecture.  If you missed Open House Chicago this weekend, you will have to wait until next October for an opportunity of this scale, but the Chicago Architecture Foundation hosts smaller events, tours, and programs throughout the year.

Were you able to go to the Chicago Open House? Share your thoughts with us by tweeting or commenting on facebook!

Kira Jannusch is a contributing writer with the Gaines International | Allen Austin team. Kira is a Loyola University Chicago graduate with a Bachelor of Science in Biology - Ecology Emphasis.

Getting Excellent Results from a Search Firm
Friday Fun: House Styles Around The World